My experience with the Oculus Rift & VR @CES (then and now) 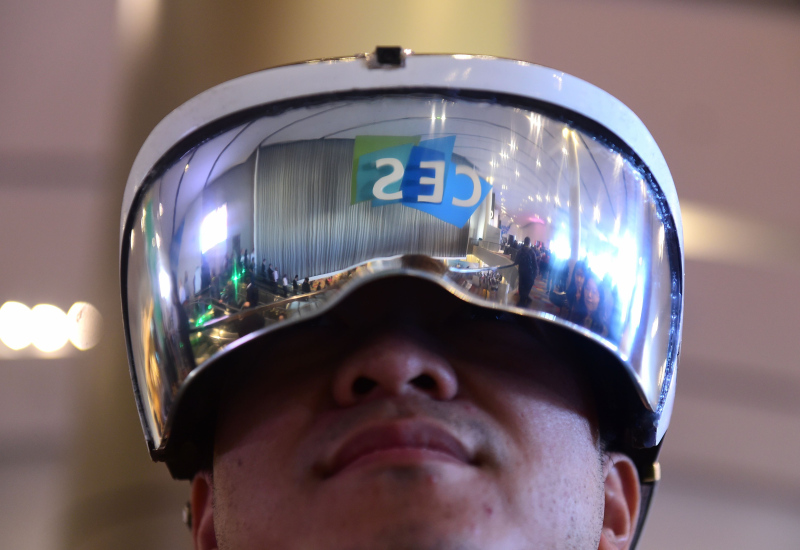 CES is an often overwhelming yet inspiring week of technological advancement that, candidly, also serves as forced global commerce enablement. After about an hour of waiting in a well-behaved line alongside the huge Oculus black box on the show floor, I was able to secure around 10 minutes with a device that has become much more fixated on gaming than I previously remember.

While my travels brought me to CES for a variety of other reasons, I couldn’t help but discuss my perspective on the evolution of virtual reality, primarily represented by Oculus, Microsoft’s Hololens and the Avegant Glyph (which I also demo’ed on the show floor).

Last year @CES 2015, the Oculus Rift “Crescent Bay” demo was one of the most remarkable technology experiences I can ever remember. After growing up with the PC era and the evolution of the Internet, it’s tough to truly be floored by technology innovation but that’s precisely what happened with the Oculus Rift “Crescent Bay”. I think I repeated my story to all who would listen for two full weeks later that month. A few of the images permanently etched into my long-term memory include:

This year, however, I will probably tell the story of my experience with the “final” Oculus Rift hardware only a couple times and move on. I’m not certain if that’s due to the now-mature commercialization of the Rift, due to ship later this year to those who pre-ordered and have a viable (PC-only) hardware setup to run this beast, or because I had already experienced the innovation that is VR. As part of this year’s gaming-oriented demo, I was also responsible for taking control of the simulation through an actual Xbox game controller which was remarkably simple even with my eyes completely inaccessible.

In my limited time with the seemingly final hardware revision, I was able to choose from nine or so titles — if I wanted to make a change, I could simply let the room attendant know and he’d switch the game demo for me. Ultimately, I only managed to play two of them:

In full 3D, you control a goalie in a hockey simulation that resembles an NBA Jam era gaming experience. You’re responsible for keeping an eye on the puck and using the left and right shoulder buttons on the controller to attempt to make the save either via goalie stick or catch glove. While it was more comedic than I would have hoped, teammates do skate over to you and verbally prepare you for the forthcoming shots coming from the opposing team. During the second half of the demo, I had an opportunity to take the offense, skating towards the net and placing a single shot from the blue line. I aimed for the five-hole but was rejected by the well-positioned opposing goalie. Maybe I’ll have better luck next time…

I’ve never been that fond of sky-based shooter games but that changed immediately when I had a chance to play this title in full 3D, albeit while seated. Looking in all directions is almost a prerequisite for success in a VR game like this, which made it a completely unique experience. The sound was completely immersive and something that stuck with me well beyond the demo experience. I was left wanting more from the weapon targeting & lock-on control system, but that’s easily solvable by the game designers and enhanced controller mappings. I think this title, depending on the storyline and multiplayer, will be a huge hit on par with Mario 64 and Halo, which are certainly high benchmarks. It’s a completely new paradigm and, as the room attendant accurately described ahead of time, will blow you away when comparing it to all other gaming experiences. As an aside, if this isn’t the specific title to achieve this, I would be willing to bet that Disney will have a Star Wars themed game ready at or near launch of the Oculus Rift that will command everyone’s attention.

After the demo and on the way out of the booth, I shared my very much solicited feedback via the Oculus team’s outpost of iPads. One suggestion for next year: stock more t-shirts if you’re going to offer post-demo swag — very few can fit into a men’s small but I did appreciate the gesture, though. 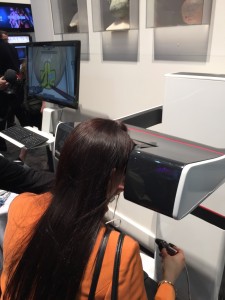 Beyond gaming, I saw a few other interesting use cases for the latest-generation VR headsets. The one that caught my eye the most on the show floor was the Robotix Mentor by Simbionix. I believe we’ll be seeing an incredible number of new use cases that will fully harness both virtual & augmented reality. In this hands-on demo, anyone can experience (and practice) simulated clinical surgery, made possible right on the show floor. It was captivating, albeit a bit vomit inducing, but that’s not the fault of the technology (this time, at least).